Week in Review, Part Two: Biking and Other Spring Exercise

So, spring was on the calendar last week, and it made a brief foray into Minnesota weather patterns as well. (It's back to snowing again now.) In fact, there was enough snowmelt that we went from sledding one weekend 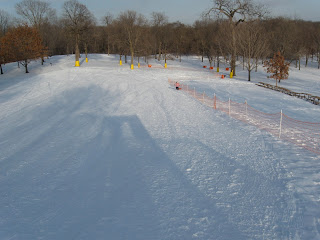 to bike riding the next. (For a couple of days, anyway. And then complaining all day the next day about not being able to ride the bike because it was raining.) 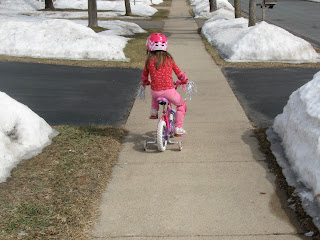 The four-year-old is enjoying some newfound bike freedom this year: she gets to ride on the sidewalk up and down our block all by herself. It is not a short block, so this is some good exercise. She's not allowed to cross any streets on these forays, though -- as she informed our dog-walking neighbor when inviting herself and and her bike along on their walk, to the end of the block.

This is another spring phenomenon in Minnesota: not only does the snow melt and the grass green up (eventually), but neighbors you haven't seen since trick-or-treating suddenly reappear, almost as if they, themselves, are spring shoots of bulbs that have spent the winter buried underground (most likely, in the basement next to the fireplace).

And, with the reemergence of neighbors, my social butterfly seems to find new friends each year. This year's new playmate is an eight-year-old who lives a few houses down from us (and who has shown amazing patience in playing with my four-year-old). They were out this weekend biking, blowing bubbles and having a party on a blanket in the neighbor's driveway with Barbies and other dolls. And, in one of those transitional season things, also playing with our snowball maker in the remaining piles of snow. (I'm pretty sure the snowball maker at our house is one of the attractions for the eight-year-old.)

Meanwhile, the eight-year-old's mom was cleaning out the winter debris from their car in the driveway (I haven't tackled that spring task yet), and I was trimming back the bushes that line our front sidewalk -- the ones that, if you don't trim them, grow to proportions that take over the sidewalk and engulf small children. At least, I trimmed the ones that had emerged from the snow: there were still piles a foot or two deep on top of some of them, and it is way too hard to pull the branches out from under such piles for trimming.

That was my exercise for the weekend. The four-year-old, in addition to all the bike riding, had soccer practice at church on Saturday morning. This is soccer for pre-K and kindergarten age. Which means things like three of them standing in the goal (regulation size goals, so they really fit in the goal), holding hands -- while the other team's ball sails right past all three of them into the goal for a score. Also, when not directly interacting with the ball, the four-year-old and a friend were entertaining themselves by doing handstands against the gym wall.

At this age, as another of her friends reminded us as they engaged in church hallway pre-choir practice entertainment of lying on their backs on the floor and stretching their feet above their heads so their toes touched the floor, they are "more bendy" than grownups.
Posted by JoannaTopazT at 7:30 AM