The merry month of May has been a busy one for our family. A few days after Easter, we left for our first-ever family vacation that was not built around spending time with other relatives -- although we did stop for one night at my parents' on our way home. We celebrated Mother's Day at a local buffet, replaced a lawnmower and a vehicle, and attended end-of-the-school-year activities like a church service with performances by all --including the four-year-old's -- the choirs and an end-of-the-year party for that choir.

Grandma came to visit us to attend that church service concert as well, and we took her bowling and out for frozen yogurt with all sorts of healthy toppings that weekend. N's was quite an enthusiastic bowler for a while, although her technique involves running up to the lane and just generally "flinging" the ball. Made for some good rainy-day fun.

She and I also went out for ice cream after the last choir practice of the year, at which the three-to-five-year-olds' choir and the first-graders through fourth-graders' choir each performed three songs for each other. They were all very active and fun songs that involved a lot of motions and jumping around. Then, back in the regular practice room, there were pictures with the teacher, some treats, and, for those who took the time, stories (the teacher was going to read a story but ran out of time; she had to get to an event with her own -- high school -- daughter). N told me she's going to miss Mrs. D, her teacher, and she's been singing "Do Lord" (the song they sang in church) on a regular basis ever since the concert, plus making up her own songs with motions. That choir also helped the kids learn the Lord's Prayer; N chose it as her prayer at family dinnertime once this spring -- although that old-fashioned "art" language seems to be a bit confusing to the preschool set: she started out "Our father that aren't in heaven..."

Weatherwise, it's been a cold and rainy spring here in Minnesota; we bought some plants on Mother's Day, but didn't get them planted in our deck containers until at least a week later because of the cold, rain and wind. The dill didn't make it, but the chives, marigolds and the chrysanthemum N picked out seem to be doing OK. I filled in some blank spots on the west side of the house with some more salvia and some hollyhocks; the idea is to get the plants in that whole area to fill it out enough that I don't have to do any weeding. (It's right next to the house, so we don't want to mow there.) N's strawberry plant, which we got at a local plant sale that benefits the preservation of one of our wooded areas, is going gangbusters: we had to repot it into a bigger pot over Memorial Day weekend, and she's counted at least 29 flowers, buds or tiny strawberries on there.

We have, unfortunately, had to hire our neighbor to mow a couple of times this spring, but finally got a functional lawnmower. At least I hope so -- we haven't tried it out yet, but I'm actually kind of looking forward to it. This is a Fiskars reel mower, which has received very good reviews on Amazon, and eliminates past problems like the fact that I have never been able to get any gas mower started on my own (easy start my foot): this one has no starter. It also doesn't use any gas, so there's no additional expense to it. Plus, it's exercise - and the husband promised to use this one sometimes, as he says he likes reel mowers. (I've been doing all the mowing for at least the past two years -- except for when we hire the neighbor or my mom comes to visit -- but, since I couldn't get the thing started by myself, I still had to wait for him to get home before I could do so.)

One advantage of the lush grass growth this spring, though, was that N and I got the chance to try free foraged food by making up some dandelion greens. We don't spray our lawn -- my philosophy is that I would rather have a kid with a childhood of blowing dandelion seeds and making dandelion stem chain necklaces than an ostensibly "weed"-free lawn. (I also highly object to the categorization of dandelions as weeds and the imposition of cultural mores and, in some cases, municipal regulations, that promote the use of environmentally and physically harmful chemicals in order to destroy valuable, *free*, food-bearing foliage, especially in light of the recent economy and people's resulting struggles. Yes, I have a dandelion soapbox.) N was a very good helper at gathering the leaves and correctly identifying them, and was disappointed that I wouldn't let her help with the portions of the preparation that involved boiling water and sauteeing them in hot olive oil. Sheesh. There was also bacon and garlic involved. Both she and I ate some and had seconds of our mess of greens, which weren't the greatest thing ever, but were OK - they tasted kind of like spinach. (DH refused to have anything to do with this endeavor. He obviously has some dandelion issues.) 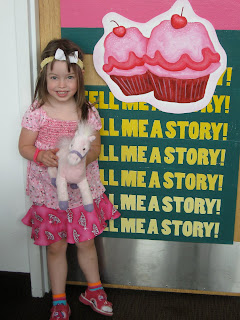 The rain and the cold continued on Memorial Day weekend -- I had to turn the furnace back on on Friday! -- so we didn't get to do outside things. We did go see the movie "Rio," and the four-year-old and I made Oreo Balls cookies. (After her request and an out--of-the-blue statement that, "Memorial Day is all about Oreo Balls.") We also went to a local children's theater's production of  Pinkalicious, a play based on the book by Victoria Kann

. N chose to wear her pink skort with princess crowns on it (made by Grandma), a sweet pink shirt with some smocking, pink sandals, Care Bears socks (from the Easter Bunny), and a pink Hello Kitty watch, accessorized by a pink pony stuffed animal -- and a yellow headband. She loved the show; it was one of those special mom moments to watch her sitting on my lap beaming throughout the performance, especially the musical numbers, and giggling. At the end of the show, she spontaneously thanked both me and DH for bringing her to "the best show ever." She also willingly stood in the long line of little girls and had her program signed by every cast member.
Posted by JoannaTopazT at 11:30 PM 1 comment: