Week in Review (Part One): St. Patrick's Day- Sort Of

I think I'm over last week's cold, but it has had lingering effects on the productivity and fatigue scale -- meaning, for example, there is no menu plan in place this week, and I still have not put together a grocery list and/or a plan for grocery shopping. This is a problem because we are running out of things like milk, cooking oil and vinegar. (We have not been making a bunch of salad dressing. The vinegar was depleted due to volcano-making. The four-year-old remains fascinated with "science experiments" that involve pouring things into other things and seeing what happens. I blame her father. :) )

Despite best intentions, nothing really got done for St. Patrick's Day, either -- I was too worn out to prepare green food in advance, we have no St. Patrick's Day books, the four-year-old announced she would not wear green, the rainbow book I tried to get from the library still has not arrived, I have no white cake mix for making rainbow cakes/cupcakes, and the four-year-old was in a contrary mood when we tried making a tissue paper rainbow window display from a sheet protector (as we did last year, and as described in her March 2010 issue of Your Big Backyard magazine). We did do a couple of leprechaun/rainbow/unicorn coloring pages/mazes printables, and, post-St. Patrick's Day, tried making shamrock prints with our heart-shaped cookie cutter and green paint -- but she quickly lost interest in that, and just wanted to paint.

(Hmm, I see when I was looking for the tissue paper rainbow link that there is a Rainbow Cookies recipe - for which we have all the ingredients. We should do this some time.

The four-year-old is a big fan of arts and crafts. She's been making Play-Doh bracelets, with Play-Doh "jewels" on them, this winter, and she has devoted the table in her room (which she refers to as "my desk") to the art jar

she got for Christmas. (We have not yet spring cleaned her room, which means that little fuzzy bits of feather are all over as, for some reason, one of the most appealing art jar projects for her has been cutting the feathers into pieces. She's also shown a renewed interest in her large Melissa and Doug coloring book

as of late, and enjoyed a toy store craft this weekend of decorating coffee filters that were then tied up with pipe cleaners into butterfly shapes. 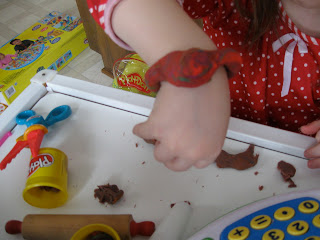 Getting back to St. Paddy's Day, I, of course, did wear green (it's my favorite color anyway, so I have a plethora of it in my wardrobe), as well as the green and orange "can't we all just get along" beaded bracelet my sister had made for me. And I attended the annual elections meeting of my women's group that night: it's a volunteer service group that actually had contested elections! For the first time ever! This was amazing, and really cool to see; I helped found this group about eight years ago (eek! that seems so long ago!), and it was like pulling teeth to get people to be on the board. This year, we had 23 people who said they would do so! It was a fun meeting, with the elections, talking about lots of great projects, and going out to socialize with friends afterward -- where our conversation ran the gamut from kindergarten to CSAs, spices suppliers, glasses measurements, "shoes and ships and sealing wax, cabbages and kings."

Why, yes, we did watch Alice in Wonderland this past weekend. Why do you ask?

I also took advantage of a local kid's consignment shop's "50 percent off everything with green on it" offer. The four-year-old is in the stage where she is outgrowing or wearing out everything, yet it's close enough to the end of the winter clothes-wearing season that I don't want to replace the items with more winter clothes. It seems like every time I turn around, a shirt is too small, another pair of pants has holes in them, or the socks are worn through -- I convinced her that we are not giving her pair of socks from which, I saw when she removed her slipper, her big toe and a great deal of her foot were sticking out, to her younger cousin.

Also, it was probably the St. Patrick's Day conversations in the air that led the four-year-old to summarize her Sunday school lesson on Jesus's healing of the 10 lepers thusly: "They were thankful that Jesus healed them, 'cause they had leprechauns, so they were really sick."
Posted by JoannaTopazT at 7:30 AM