Week in Review: Singin' in the Spring? 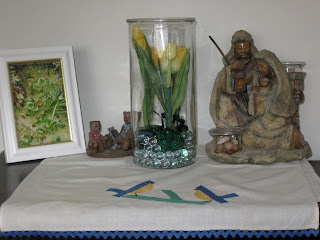 I did a bit of cleaning this past week -- I suppose one could call it spring cleaning, as I did take most of the winter decorations down, and redid our seasonal table with some more spring-like decor. (The bird dresser scarf is from my grandmother, and some of the artificial tulips -- the silk ones -- in the vase were decor at my bridal shower several years ago.)

Part of the reason for this was that I hosted a "Sing in the Spring" brunch on Sunday. I really enjoy entertaining every so often, and used another of my grandmother's linens -- an card-table-sized tablecloth embroidered with spring flowers -- to cover up some of the scratches on my coffee table, which served as one of the eating surfaces. (It has also seen semi-regular use as a racetrack for toy cars, dumping ground for wooden blocks and puzzles, etc. -- hence, the scratches.) Menu consisted of orange juice and water served in pitchers -- as well as peppermint tea in a spring green teapot, but I don't thin most people noticed that -- fruit served in a cut glass serving dish that I think was a wedding present, microwaved sausages served in one of our wedding china bowls, Almond Cake (recipe from my grandma) served in a Tupperware® cake keeper, and Spinach-Egg Casserole served in the glass casserole dish I baked it in (the one with the lid; to make it easier to store leftovers).

After some time chatting and eating, a former coworker of mine, who left to actually pursue her dream of a career in music, led us in some semi-structured singing and in some singing exercises. (She's now running a "spontaneous singing" business, designed to teach people improvisational skills that can transfer to other areas of their lives -- whether they "can sing" or not.) I don't think anyone really knew what to expect, but we ended up learning a beautiful song in the Zulu language (the lyrics, which she eventually translated for us, translate to "every burden rolls away"), having a hilarious "story" communication around the circle which took place completely in invented language -- emphasizing the importance of nonverbal communication -- and created a samba rhythm with various groups counting different beats and combinations of "1 and 2 and 3 and 4." It was great fun to spend this time with friends, and to spend time singing -- and our singing experience used much more energy than I thought it would!

The four-year-old and the husband were not home for much of this event, but the four-year-old did help prepare the spinach for the egg casserole the previous day by helping me cut it into smaller pieces: I used the kitchen scissors; she used one of her pairs of safety scissors -- which I washed afterward, because she complained that they turned green.

And, despite the new decorations and the spring theme of the brunch event, spring has not yet arrived here -- it snowed again late Sunday afternoon and evening. Which is one reason why it's a good thing that our church is offering a youth soccer program on Saturdays in March: it's the time of year when parents and kids are getting desperate for opportunities to run off some of that pent-up energy. (We've played some Gator Golf in the house, but it's just not the same.) In fact, at last Saturday's first session of the pre-K and kindergarteners' soccer, as soon as the coach said, "Now I want you to run--" all the kids took off immediately running in the church gym. They didn't bother to wait for further instructions. The four-year-old actually did pretty well with the "skill drills" in practice, and played enthusiastically -- at least until she wore herself out.

Earlier iin the week, I also went to a Craft Night with friends, where we worked on various crafting projects in one woman's living room. I have a few cross-stitch things I'd like to get done before Christmas (especially since the original intent was to finish them for last Christmas...), but at least I'm not working on a needlepoint project begun 30 years ago. :)

And, last Wednesday evening, I saw four trumpeter swans flying north in the early evening. Perhaps it's a sign that some spring-like changes are on the way.
Posted by JoannaTopazT at 9:30 PM