(Almost a Month) in Review - Part One

Aaagh! It's snowed again today. I am so ready for this to be done with: I completely agree with the comments posted on a local news channel's weather section, in which someone identified Minnesota's seasons as including Winter, Still Winter and Enough Already!

I do, however, feel vindicated that I had not yet got around to packing away winter coats and boots or doing the seasonal wardrobe switch. Truly, my distrust that snow season is over until some time after Easter -- no matter how late Easter occurs -- has proven wise this year.

We have, however, had some quasi-warm days in the past couple of weeks: warm enough, at least, for the four-year-old to engage in bike riding. Before (most of) the deluge of snow from the winter melted, she was fancying herself a tracker on some of those rides: she'd stop the bike to examine animal tracks in the remnants of snow left near the sidewalk, count the toes, and speculate on the animal that had caused the tracks. (Note: my vote is for a dog going for a walk.) She also directly transferred the sand buckets and shovels from use in the front yard -- where they had been building snow castles, pretend ice cream, etc., this winter -- to the sandbox in the backyard, where she has been spending much time. She gathered pinecones from a neighbor's tree that overhangs our fence and drops them into our yard for use in the sandbox as well; for what purpose, I'm not exactly clear -- although I do know that she's been playing "pirate treasure," which involves burying things and then digging to look for them.

Birds have been spotted in our yard, too -- we've seen robins, cardinals and mourning doves -- and we paid a visit to the Minnesota Zoo for their "spring babies" exhibit, which involved petting a baby rabbit and admiring baby chicks, calves, a camel and more animals. We had several conversations that the zoo would likely not be having any baby horses, since - I'm pretty sure -- all of their grownup horses are "daddies," and you need both a mommy and a daddy to have a baby animal.

I've made some minimal progress on spring cleaning. One thing I did accomplish was cleaning out the Tupperware/plastic dishes cupboard, doing such things as identifying which repurposed containers actually had lids, which lids fit what, and containing said lids of the repurposed containers in a Ziploc bag so they don't spill all over the cupboard. I also found the popsicle molds in the back of the cupboard and had to fend off a request from the four-year-old to make popsicles -- for one thing, it is not warm enough yet for popsicles (see note about snow!); for another, I refused to start on this year's batches of popsicles until I had cleaned up the sticky mess in the freezer from where last year's popsicle juice spilled. (She does not know that I also successfully cleaned out the grime from the fridge and its on-top freezer while she and her grandma were watching the movie "Secretariat" -- again. Complete with pretend horse races starring the four-year-old. It's a shocker that the knees get blown out of so many of her pants, I tell you ...) 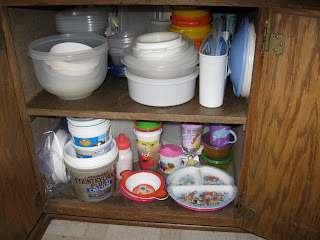 Grandma's visit to us was in part to do fittings on the new spring dress and skirt she was making for the four-year-old and me, from matching fabric. (Four-year-old N has been wanting to have matching outfits for a while now, and I figured we'd better do this while she still thinks it's cool. I let her pick the fabric -- within reason -- which ended up being a purple background with a spring floral print.) I was also able to delegate her to four-year-old haircut duty, and to send home my yard waste from bushes trimmings with her (the lazy woman's way of getting rid of it before our yard waste season). Grandma also accompanied us to the movie "Hop" that weekend (meh. It was OK.) and to a spring craft show where I purchased some cleaning cloths and some Easter-themed cloth napkins, my mom purchased a couple of metallic garden flowers for outdoor decor and the four-year-old, after energetic play in the indoor playground of the community center, plus rearranging nearly every single one of the (possibly former kindergarten teacher, or at least blessed with patience) vendor's plastic eggs in her display, convinced her grandma to buy her one of these items: a washcloth folded into a bunny shape whose tummy holds a plastic egg which, in turn, contains a tiny ice pack, to be used as a "boo-boo bunny." 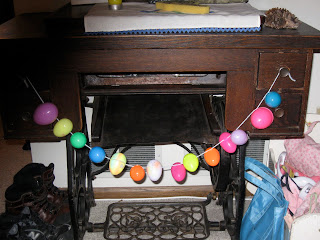 We've also remembered this month to get out our Easter books for our seasonal reading basket, and we made a plastic egg garland -- as suggested in Amy's Notebook of March 16 -- for a household decoration. (Plastic eggs saved from previous years' egg hunts, plus the four-year-old's crafts stash of yard sale yarn, provided easy supplies for this.)
Posted by JoannaTopazT at 9:43 PM