Menu Plan Week of January 9 (Eatin' From the Freezer)

Among the "new year" organizing projects completed this past week was a new, and complete, inventory of what's actually in the freezer and the pantry. (There is a lot in the chest freezer. And moving it all out to count it was an exercise in itself.)

Now that I know what we have, we can work on eating it down -- partly because that is what we generally do in January (normally, it is bitterly freezing during a Minnesota January and any excuses not to freeze my fingers off getting into the grocery store are most welcome -- unlike this year's bizarre balminess); partly because there is a lot in there; and partly because, in looking over my financial records of tracking spending for last year, I noticed significant upward creep in the grocery spending category in the last months of the year.

I think that's due to a variety of factors: rising grocery prices overall, seasonal celebrations, figuring out what to feed a kid who's started school for snacks and lunches, and the fact that the end of the year got so busy that I basically said "what they hey..." (or some less flattering language) and gave up on many of the extra efforts to keep grocery spending in line.

Anyhoo, I actually find it fun to try to incorporate frugal and/or old-fashioned tactics like meal planning, planned leftovers, eating food that's been somehow preserved from the bounty of the harvest, etc. 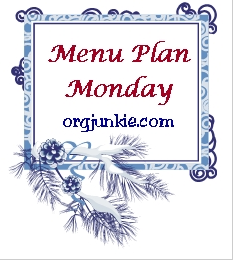 This coming week, I'm thinking we shouldn't really need to buy groceries --- except possibly for milk (we seem to be going through a lot of milk lately) and toilet paper (does not, I hope, need explanation).

This past week, a couple of our meals used up some pantry/freezer food: a dinner of Pot Roast with Potatoes and Carrots, plus Blueberry Muffins (the potatoes were some of the last from last summer's CSA; the carrots were in the fridge from some time in December; and the beef broth -- I did this in the crockpot -- was from the pantry. I did buy the actual meat at the store, but it came with a free bag of onions, which will get used in other meals, too. The blueberry muffins used the last half of a container of blueberries in the fridge freezer, rather than the chest, because I had used the top half for -- something. The fact that I cannot for the life of me remember what is worrisome, because I'm pretty sure it was some time this year -- the one that started eight days ago).

Some of the beef from the pot roast got a second life -- beyond straight leftovers -- shredded up as the meat for a Black Bean Taco Bake (a recipe that orgjunkie linked to on a previous Menu Plan Monday). That also used a can of black beans from the cupboard, some tortillas from the fridge (cut up into bite-size pieces); and one of the containers of salsa I made from last summer's CSA produce from the freezer).


Here's my eatin' it up plan for the coming week:


Monday: Corn Chowder in the crockpot; Crescent Rolls. Uses up the last of the CSA potatoes, plus an onion from the free bag, the remaining carrots from the fridge, and a container of homemade turkey broth and some corn, both from the freezer. The crescent rolls were in the fridge. (I was going to make something more homemade-y for bread, but decided to have a more restful Sunday instead.)

Tuesday: Shrimp Pilau (a recipe from my dad's homemade cookbook). Will use shrimp from the freezer, tomatoes from either the freezer or cupboard (canned), rice on hand, and we'll substitute spinach (I did go to the store this past week -- just hoping not to need to again this month) for the okra, since my husband despises okra. Also uses an onion and some bacon, from the freezer. I'll be using other spinach previously for a salad, with orange slices, for my lunch.

Wednesday: Spaghetti. Pasta and jarred sauce from the cupboard.

Thursday: Bacon and Pancakes/Waffles. Thawing the bacon for the shrimp pilau means we'll need to use it up somehow (I've had it go bad on me unfortunately quickly before.) We may break out some of the waffles from our last batch that are in the freezer; if made fresh, they might incorporate something like blueberries, or pumpkin, or maybe that last apple that's getting slightly squishy and might not make the best straight eating....

Friday: Pizza. A family tradition, plus I'm lazy at the end of the week.

I'm pretty sure we'll eat something on the weekend, too.