Spring Vacation: It Was a Zoo (Or Two) 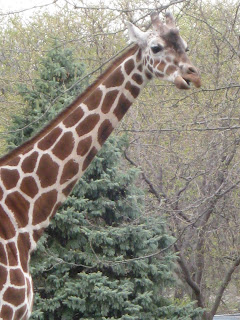 Our vacation this spring was a family "zoo tour."Since we are lucky enough that my mother gets us memberships to the Minnesota Zoo for birthday presents, we also have the advantage of getting discount tickets to other zoos -- such as Kansas City and Omaha. And, since DH's work schedule gets crazy busy in the summer, and N starts kindergarten in the fall, if we were going to fulfill this family zoo tour dream of his, this spring it was. We drove from the Minneapolis area to Omaha the first day, filling time in the car with a few extras for this extra-long car trip like audiobooks of Olivia and Arthur stories from the library, some laminated letter tracing pages from the preschool packs at Homeschool Creations, and mazes, dot to dots and a U.S. map from the  Travel Activities in a Binder eBook download that was available in April to subscribers to the Molly Green newsletter at econobusters.com. (I had extra car time fun stuff stashed "up my sleeve," as it were, but didn't end up using it, as she did so well without it. I'm saving it for another long car ride later in the summer.)


I had had a heck of a time finding an open hotel room to reserve in Omaha; it turned out that weekend was the Berkshire Hathaway shareholders' conference, which might help to explain that. We ended up staying at the Hampton, which was a bit more upscale than I had originally planned, but was a very nice hotel and hotel experience (some gift money covered the hotels). Luckily, it was next door to a Target, too, since DH and N had neglected to pack her pajamas. She was due for some new summer ones anyway, and the Target gift card in my purse from a previous deal came in handy for the pink nightgown emblazoned with a rainbow unicorn on the front.

The Hampton did have an indoor pool (my hotel requirements had been that they serve breakfast -- to save money and time - and that they have an indoor pool, since we would be taking a four-year-old on long car trips in the Midwest in early spring), but it was quite cool, and the water in the shallow end came to maybe an inch below the four-year-old's mouth. We went in there for a while, but I pretty much had to hang onto her the whole time. The breakfast was great, though. At one point, we got into the elevator along with a group of Japanese businessmen, who N at first thought were the president. (I guess there are a lot of Japanese people in Hawaii...) One of them spontaneously gave her a mini kewpie doll thing on a business card that said -- something-- in Japanese. It's attached to a string, so N told me she wants to hang it on our Christmas tree. I put it with the ornaments when we got home. 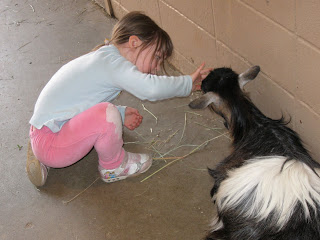 I was very impressed with the Omaha Zoo. They have a year-round butterfly exhibit, a huge indoor jungle exhibit with meandering rivers with hippos and such in them, and animal statues and fountains scattered throughout the zoo. There's a bridge with fish food machines where kids can throw food to very fat koi fish and some swans, and a farm petting zoo area with goats and such, right behind a very nice merry-go-round. We watched an otter try to get herself into one of the otter home holes and had a zookeeper tell us she was a bit confused, because she'd just been moved out of that hole and into the other one the day before. They also had a desert exhibit, and a huge nocturnal animals exhibit that was both cool and creepy, as you walked along very, very dimly lit bridges and occasionally saw an alligator, or a muskrat, or a beaver, in the waters below (if you had a flashlight or other source of light; that part wasn't very well thought-out). We saw a swan building a nest along a stream bank, and some storks nesting on the roof of a building in the enclosed aviary. It *was* a bit disconcerting that there was a small leak in the polar bear's exhibit out of which water was coming, but overall, the Omaha zoo was very cool. 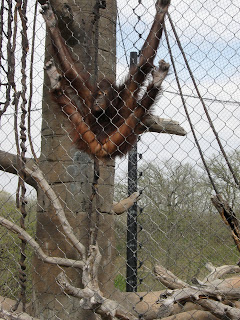 They were having a DNA days special event the day we were there, so there were tables set up various places where the four-year-old got to do things like build a marshmallow and dry pasta critter sculpture using a roll of the dice to determine what features it would inherit from each parent, and to collect (well, I collected them for her) famous scientist trading cards.

After spending a day at the Omaha Zoo, we spent the next day driving to Kansas City, where our hotel was much less nice, the hotel was in a much less nice area of town, the indoor pool was in an enclosed building -- that you had to walk through the outside courtyard, in very cool weather, to get to -- and the check-in staff's computers kept breaking down.


Ironically, this place's pool -- despite the needing to go outside, in our bathing suits (and sweatshirts) in 60-degree weather to get there, turned out to be much more fun: the water was warmer, and the shallow end was actually shallow enough for young children. (Not unsupervised, of course.) N and I had some good play time there; she surprised me with how much of the skills drills (cleverly disguised as fun games) she remembered from last year's swimming lessons, as she told me what to do while she acted as the teacher.

Our day at the Kansas City Zoo was a cold one, despite being the first of May -- it sleeted on us briefly! but was still fun. You could tell it's an older zoo than Omaha, with several of the exhibits showing their age, but it's also quite spacious and in the middle of a park full of trees. That part impressed DH, and I would guess that, on a hot summer day, it would likely be nicely cool and shady. 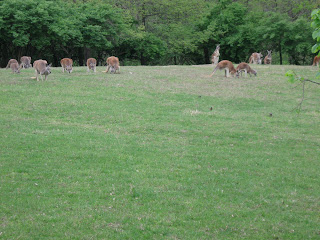 One of the big draws for our family of the Kansas City Zoo was the African animals exhibit (for some reason, N is very interested in Africa and African animals). We saw the hippos, the lions and more. They also had elephants -- four or five of them, I was pleased to see, having recently read about how elephants get very lonely when there is just one of them. An unusual feature of the Kansas City Zoo was an Australia area where the kangaroos appeared to roam free on a veldt...or, in Kansas City, I would guess it might just be a field of grass...near a cafe where people could sit at outdoor tables and watch them. No fence, or at least none that was apparent. Also in the Australian area was a sheep farm exhibit, where shearing was taking place the day we were there. (Unfortunately, this did not appear to be an expert shearer; I happened to have just read a book partly about sheep farming, and there were way too many nicks on those newly naked sheep.)

There were some great climbing areas for kids at this zoo, including a rope net where you were supposed to pretend to be a spider monkey, and a huge baobab tree the kids could climb to the top of and peer out, with slides about halfway down it. We rode the zoo's train as a family; N rode on the carousel; and she fed the deer -- I've never been to a zoo with deer feeding before. 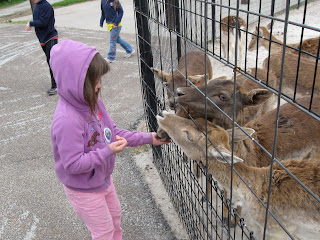 As her souvenirs from these zoos, N picked out a stuffed zebra in Omaha and a stuffed llama in Kansas City at the gift shops. Her favorite stuffed Sheep, who did of course accompany us on the trip, actually stayed behind in the hotel rather than riding in the car to the Kansas City Zoo -- but, as we walked out the gate toward our car after the day there, she called her Sheep on her pretend cell phone to say what was going on, "Oh, we went to the zoo..."

While we did not go to the Worlds of Fun amusement park, we did drive past it on on our way into and out of Kansas City, an it was quite visible from the freeway, particularly the large roller coaster. That prompted the comment from N, "Wow! Look at that! I would *pay* to go on that!" (I asked her how much she would pay. "One hundred ninety dollars," was the answer.)

Rather than driving all the way back from Kansas City to Minneapolis in one day, we stopped off at my parents' house in Iowa for a night. This also had the advantage of giving DH and I an opportunity to go out on our own for a belated anniversary dinner, whilst N stayed with Grandma and Grandpa. On our drive home, as were speculating whether she had convinced Grandma to go to the ice cream shop, we passed the two of them walking uptown headed toward exactly that destination.
Posted by JoannaTopazT at 10:45 PM